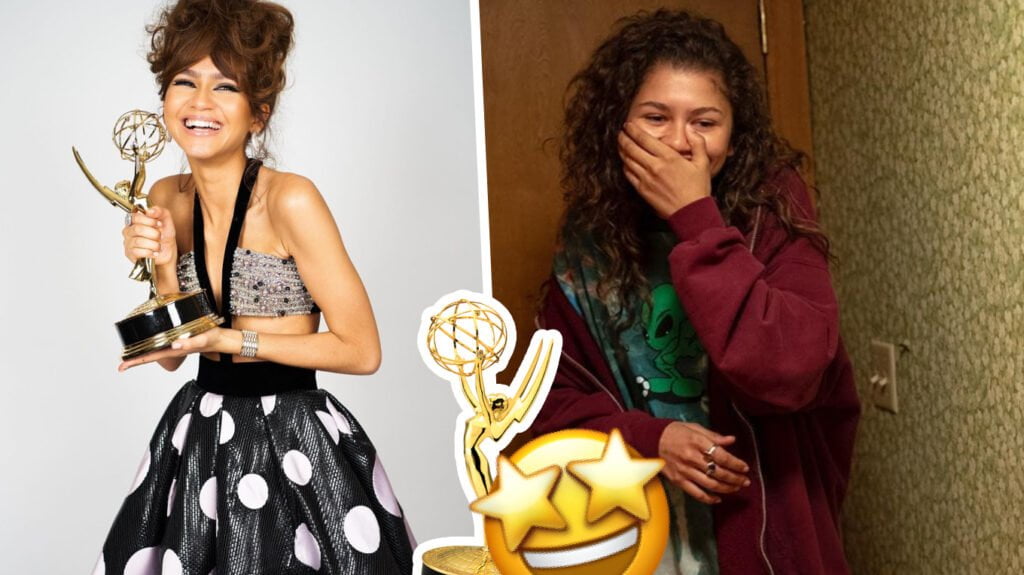 Zendaya, from HBO’s “Euphoria”, has officially made Emmy history as the youngest person to ever win Lead Actress in a drama series. She is also the second Black actress to win this award, followed by Viola Davis, who first made the breakthrough in 2015 for her lead role in How to Get Away with Murder.

The Euphoria star beat out some pretty incredible nominees, by the way, such as The Crown’s Olivia Colman and Ozark’s Laura Linney. Regardless, she thanked “all of the other incredible women in this category” and said how much she admires them.

Viewers were also happy to see an increase in the diversity of winners this year, with 10 out of 19 performing categories won by black actors, as opposed to last year’s 2 out of 19.

Still don’t really have any words….feeling so much love right now, thank you.

The 24-year-old received the award for her portrayal of Rue, a 17-year-old teenage drug addict, fresh out of rehab. “Euphoria”, a drama series written by Sam Levison, sparked up quite a few conversations following its release in the US, due to its explicit depictions of drug abuse, self-harm, and sex, which are allegedly inspired by Levinson’s own personal experience of teenage addiction.

Inspired by other incredible people her age trying to make the world a better place, she said “I just want to say that there is hope in the young people out there – I know that our TV show doesn’t always feel like a great example of that – and I just want to say to all our peers out there doing the work in the streets: I see you, I admire you, I thank you.”

Backstage at the (virtual) Emmy’s, Zendaya also expresses her gratitude for everyone who watches “Euphoria” and connects to her character, left in awe by how people across the world “are able to attach words or find themselves within a scene or a moment where they otherwise felt alone”.

The success for Zendaya, of course, does not end here – Euphoria has recently been confirmed for a second season, but we are unsure when it will be released, due to delays in filming because of the pandemic. She’s also set to star in another Spider-Man movie next year, will feature in Frank Herbert’s new adaptation of the novel Dune, and Vivica A. Fox admitted in an interview that she wants Zendaya to portray her on-screen daughter in Quentin Tarantino’s Kill Bill 3 – but nothing for that is yet confirmed.

OUTSTANDING LEAD ACTRESS IN A DRAMA SERIES EMMY NOMINEE @ZENDAYA !!!! so much fucking love. 6 nominations total at this years #emmys !!!!!