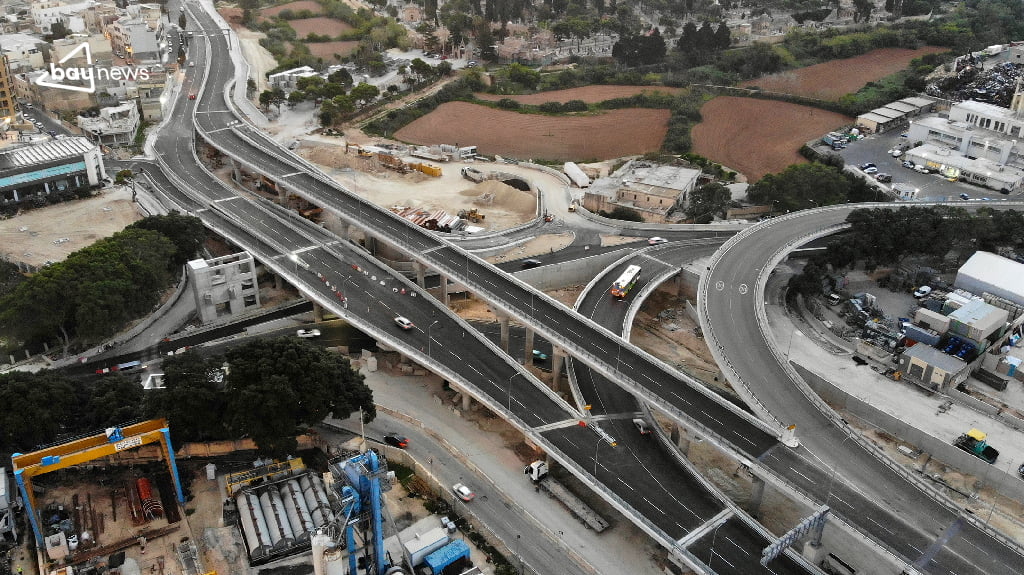 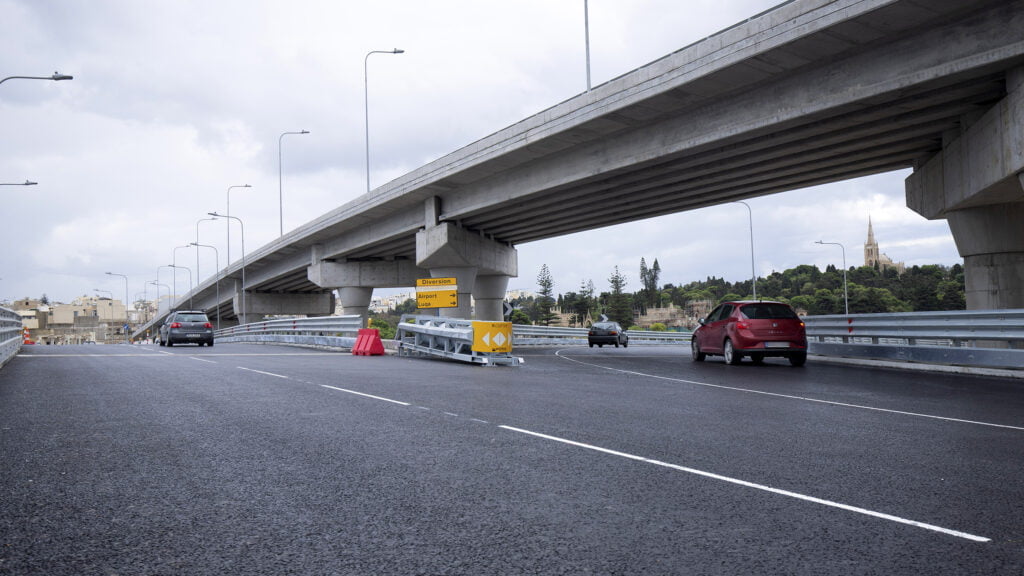 The first two of the three interconnected flyover structures take road users from Marsa to Santa Lucija Avenue, which has recently been reopened in the southbound direction towards Santa Lucija and Tal-Barrani Road, Tarxien. Santa Lucija Avenue was closed for reconstruction earlier this year as part of the same project and the development of the new Santa Lucija Roundabout Underpass further south along the same route.

The third flyover structure connects Aldo Moro Road with Giuseppe Garibaldi Road, in the direction of Luqa, Gudja, the Airport and the Kirkop Tunnels. This flyover introduces two uninterrupted dedicated lanes between these roads and eliminates the bottleneck in the temporary lanes that served this connection since the first of the project’s flyovers was opened a year ago. 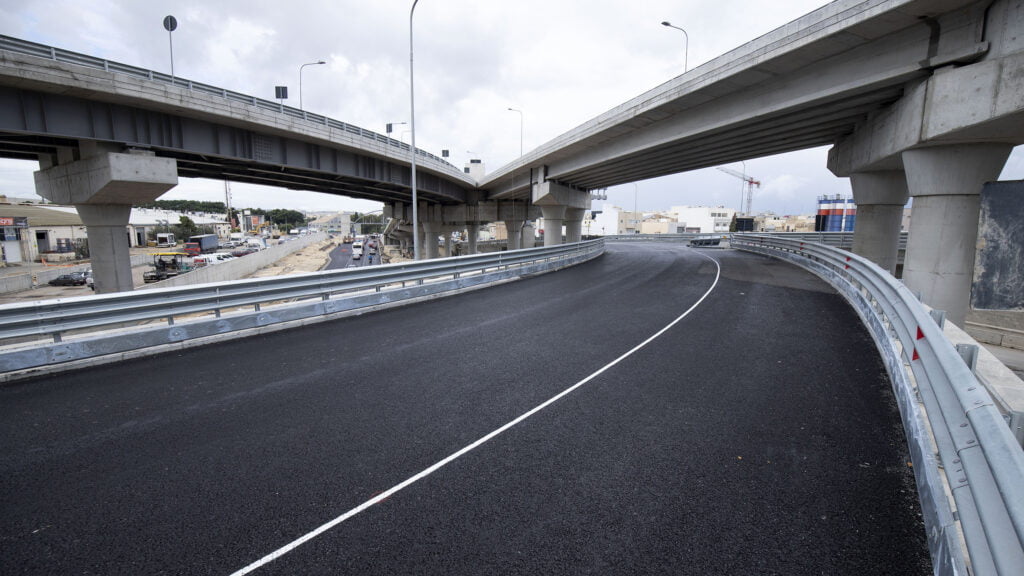 The opening of the new southbound flyovers paves the way for Infrastructure Malta to use the other three flyover structures completed last year in their actual northbound direction. Until Sunday, they were being used in contraflow, to serve the southbound routes.

These flyovers are now closed for a few weeks for final asphalt laying, for the installation of expansion joints and for new line markings and roadside signs required to delineate their final traffic direction.

Later this month, Infrastructure Malta will also open the northbound carriageway of Santa Lucija Avenue, from Santa Lucija to Marsa. The agency will then be able to open the seventh flyover structure of the new Marsa Junction as well.

This flyover, which was completed a few weeks ago, will link the northbound carriageway of Santa Lucija Avenue to the Addolorata Cemetery, to a new park and ride area forming part of the same project, and to Il-Gvern Lokali Road, towards Qormi (Turkish Cemetery area). 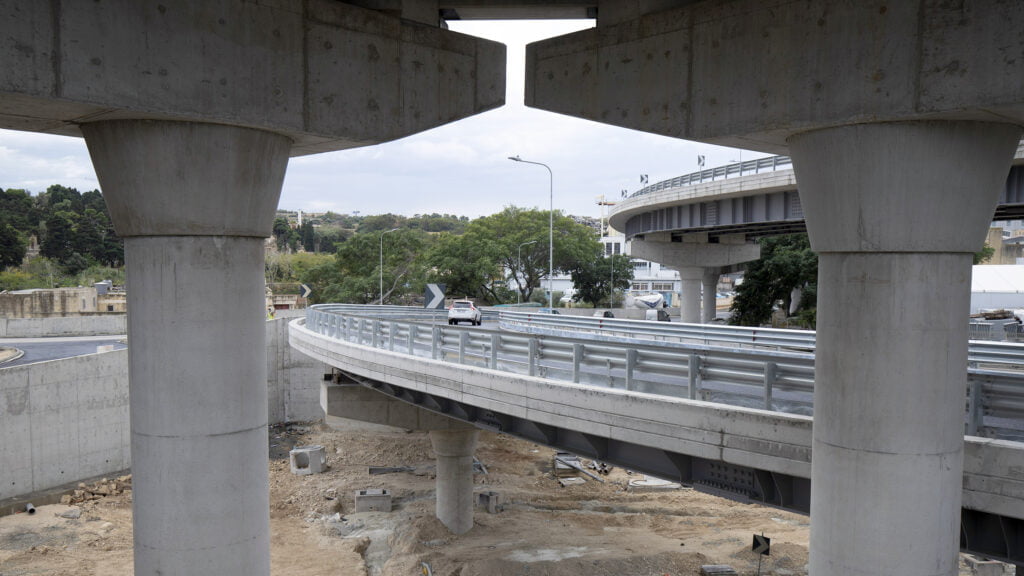 The three new flyovers that Infrastructure Malta completed this week comprise 1.3 kilometres of the 12 kilometres of new lanes of the Marsa Junction Project. The first flyover structure rises from the end of the southbound carriageway of Aldo Moro Road. Its 13-metre wide, three-lane deck extends 62-metres to the other two flyovers structures.

The second 132-metre long flyover has three exit ramps. One leads to the Palm Street area of Paola, another continues straight towards Santa Lucija Avenue, whilst the third one goes to the Addolorata Cemetery and other nearby areas. The third flyover structure is a 90-metre curved steel bridge branching out towards Garibaldi Road.

The three flyover structures are built on 20 reinforced concrete columns, supported by 116 piles embedded up to two storeys underground. The superstructure of the first two flyovers includes 83 prestressed concrete beams, whilst that of the third one is made of four 67-metre steel beams. The intersection of these three structures includes another seven 26-metre steel beams.

The three flyovers form the intermediate level of the new multi-level junction, with the other three flyovers built last year seven metres above them and other new lanes at grade 7.5 metres beneath them.

The project’s new footpaths and pedestrian bridges, bus lanes, bus lay-bys, park and ride areas and segregated cycling tracks are under construction as well. Around these new connections, Infrastructure Malta is forming new landscaped areas with many new trees and four monumental public art installations. It is building underground reservoirs to harvest 1.5 million litres of rainwater for the irrigation of these new green areas.

The project contractors are also laying over 13 kilometres of underground networks, including water mains, sewers, walk-through culverts for electricity cables, Internet and other telecommunication cable ducts and stormwater pipelines.

The Marsa Junction Project is co-financed through the European Union’s Cohesion Fund and the Connecting Europe Facility. It includes the development of a new multi-level intersection to replace the old Addolorata traffic lights system with 12 kilometres of uninterrupted lanes, grade-separated at three levels, creating direct northbound and southbound connections between the arterial roads merging at this network node. It is ending traffic lights waiting times along this principal route to southern Malta, whilst reducing congestion emissions in Marsa and other nearby localities.