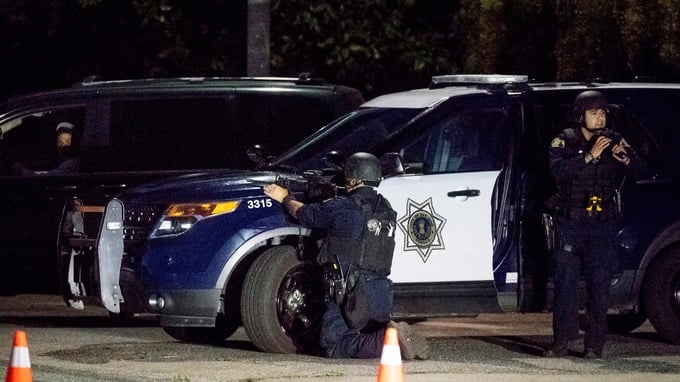 A six-year-old boy is among three people killed in a mass shooting at a California food festival.

Stephen Romero was shot dead when a man described by witnesses as white, aged between 20 and 35 and wearing military fatigues opened fire on the final day of the Gilroy Garlic Festival on Sunday,

Stephen’s mother was among the 15 wounded after being shot twice in the hand and had to be taken to hospital.

His grandmother was also attending the festival and was shot in the leg.

A witness named Julissa Contreras told NBC a white man in his 30s armed with a rifle opened fire indiscriminately.

She said: ‘I could see him shooting in just every direction. He wasn’t aiming at anyone specifically. It was just left to right, right to left.

‘He definitely was prepared for what he was doing.’

Police confirmed that there were four known fatalities – the three victims and the shooter – and 15 confirmed injuries.

Earlier reports indicated that as many as 60 people were injured in the mayhem.

The hearts of Gilroy PD and entire community go out to the victims of today's shooting at the Garlic Festival. The scene is still active. If you are looking for a loved one, please go to the reunification center at Gavilan College at parking lot B. #GilroyActiveshooter

The Gilroy Garlic Festival features live entertainment including bands and cooking competitions, as well as food and drink, and draws nearly 100,000 people over three days each year.

The family event is a major focal point for the small city of around 50,000 people.

The shooting took place as the festival was winding down.

Evenny Reyes, 13, added: ‘We were just leaving and we saw a guy with a bandana wrapped around his leg because he got shot. And there were people on the ground, crying.

‘There was a little kid hurt on the ground. People were throwing tables and cutting fences to get out.’