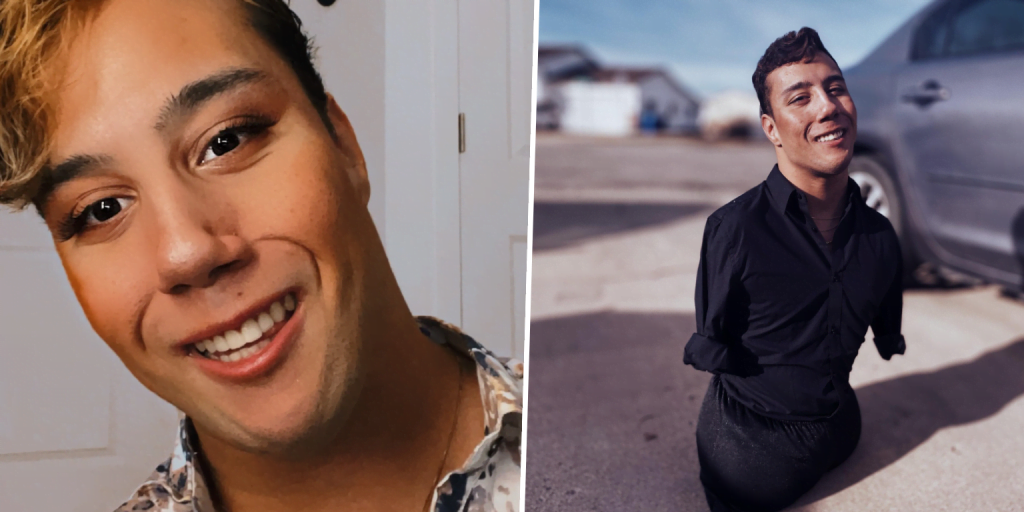 Gabe Adams-Wheatley was abandoned by his birth parents as a baby – but 22 years later, the TikToker is demonstrating his worth…

Over 2 million people on TikTok regularly tune into Gabe as he shares insights into his life – be it in the form of makeup tutorials, storytimes, tales with his husband, or examples of how he goes about his day-to-day routine with no arms or legs.

There will come a day I will fall down these!😂 #greenscreenvideo #independent #fyp #viral #disability #ican #igotthis

Gabe was born with a birth defect called Hanhart syndrome, which affects the craniofacial region and the limbs. It can result in an incompletely developed tongue, absent or partially missing fingers and/or toes, abnormalities of the arms and/or legs, and an extremely small jaw. Gabe was abandoned in a Brazilian hospital after birth but was later adopted by a family in the US.

He was welcomed into the family with open arms and became a brother to multiple siblings. Instead of babying him because of his condition, his mother decided to raise and treat him ‘like the rest of his siblings’.

As a child, Gabe used a wheelchair and struggled with short-term memory loss, but his family taught him to be ‘strong, kind, tough, honest, loyal, smart, brave, and independent’. He also opened up about struggling to make friends at school, as classmates ‘hardly ever asked to play or hang out’.

Gabe continued to be left out until he performed in a school talent show in seventh grade, where his dance proved that he ‘wasn’t just the kid in the wheelchair’. He has since shared several videos of himself dancing online, as well as other videos where he opened up about how he has been ‘verbally and physically’ made fun of and told he ‘wasn’t good enough’, even attempting suicide.

After a year of setting up his TikTok page in 2018, Gabe met his now-husband on Tinder and found they connected ‘on a level that he’s never really had the chance’ to experience before. He noted how he sees him for who he is and loves him unconditionally, ensuring he is always there to offer support.

🧚🏽I like to smile through my breakdowns!✨ #makeup #makeuptutorial #glam #makeupartist #lashes @ddlovato

Gabe has consistently proven his independence, though he has previously noted that people continue to be surprised when he explains that his daily struggles aren’t physical ones. Instead, he finds himself having to overcome his ‘inner monsters’, pointing out ‘everyone is always going through something’, even if it might not be what you expect.

He continued: ‘But I would just like to say don’t give up! There’s always going to be people who care and love you. You just gotta find them.’