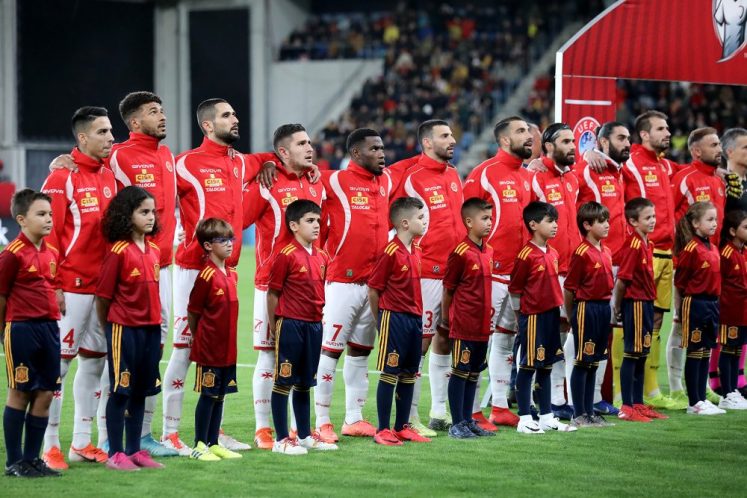 Malta’s national football team has been branded ‘a bunch of ballerinas’ by angry fans after suffering yet another humiliation in the Euro 2020 qualifiers.

Spain clinched the top spot in Group F in style by hammering Malta 7-0 in Cadiz on Friday for their biggest win of the year.

He told reporters: ”We played poorly at set plays and conceded too many goals from those situations but we lost to the best team in the world, in my opinion.

Furious Malta supporters took to social media describing the match as ‘a horror show’, ‘a disaster’ and ‘an utter humiliation’.

Some called for the Maltese football manager to be sacked.

One angry Malta fan posted on Times of Malta on Facebook: ‘It was an embarrassing performance. The players’ body language said “get me off this pitch, I don’t want to be here.” Motivation and belief comes from the coach.’

Another added: ‘What a waste of resources! Why do we keep on wasting time and money in football when we have Maltese who have excelled and are more promising in other sports?’

Other supporters called for the manager to quit over the team’s terrible performance.

One fan wrote on the Malta FA’s Facebook page: ‘Ray Farrugia should resign and most of the national team players retire. They are a humiliation to our country.’

Another raged: ‘Clueless from top to bottom. Sack the lot of them.’

A third posted: ‘Malta were destroyed and we deserved to be destroyed. Our team plays like a bunch of ballerinas.’

Malta will be hoping to bounce back on Monday when they face Norway at Ta’ Qali.

What happened on the pitch?

Alvaro Morata put the Spaniards on their way to a resounding victory over Malta by netting midway through the first half, scoring for the seventh consecutive game for club and country.

Santi Cazorla doubled the lead shortly before halftime with his first goal for his country in over four years.

Malta battled on until the floodgates opened in the 62nd minute.

Villarreal’s Paul Torres, who had just come on to make his debut, turned the ball in from close range.

Robert Moreno’s side turned on the style in the second half, with defender Pau Torres marking his debut with a goal in the 62nd minute and Pablo Sarabia also netting for the first time for Spain less than a minute later.

Dinamo Zagreb striker Dani Olmo then came off the bench to make his Spain debut and moments later marked the occasion by scoring his side’s fifth goal, while Gerard Moreno soon followed by netting his first goal for Spain.

Former Manchester City winger Jesus Navas rounded off the humiliation for Malta in the 85th minute with a placed finish into the top left corner from 25 yards.

Malta v Spain over the years

The two sides met for the first time in 1963 where Spain hammered Malta 8-0.

In May 1983, Malta managed to score two goals in a 3-2 defeat against the Spanish in the European qualifiers.