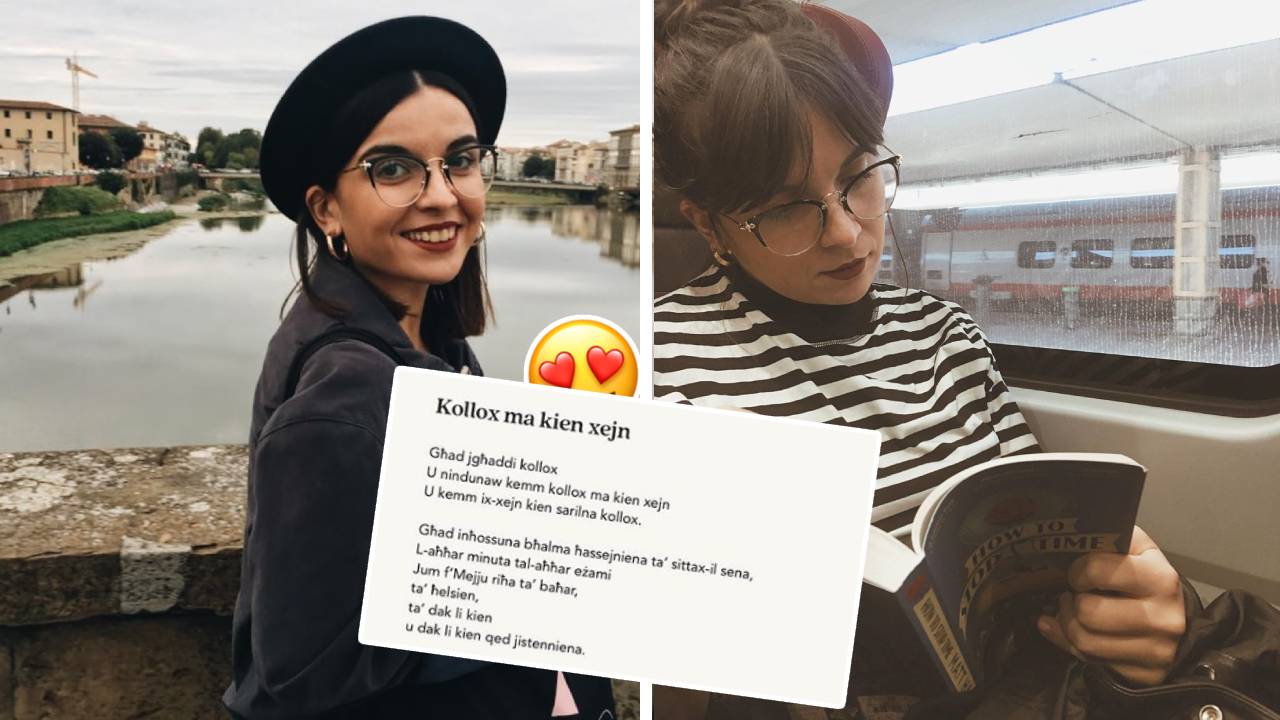 It’s been a tough couple of weeks for us here in Malta, with measures limiting our freedom of movement. People are still allowed to roam around in uncrowded places, in no more than groups of three, unlike Christa Boffa, a Maltese Expat residing in Italy, who has now been a part of a nationwide lock-down for the past four weeks.

Over the past few days, Christa has taken to her Instagram stories, to share a number of poems she has written herself, in all three languages she is fluent in: Maltese, English and Italian. All poems beautifully convey what we’re all more or less feeling like now, but one in particular, hit us like no other. ‘Kollox Ma Kien Xejn.’

I wrote the poem I shared after I had finished watching a program on TV which showed the desperate situation hospitals in Italy are currently facing,’  Christa tells bay.

‘Finding solace in  media is currently very difficult, and as usual, I resort to the arts for some consolation in such hard times. I think writing it was probably just an attempt to console myself, as being in this situation, I think, will make us experience the smaller things much more once this is over. Knowing many people are currently experiencing the same feelings, I decided to share it on Facebook and Instagram. I never expected the feedback I got! I’m glad I managed to also give hope to a tiny fraction of people in all of this.

‘We’ve been in lockdown since the 10th of March…,’ which means we’ve just started our 4th week at home. These four weeks have been a roller coaster ride of emotions to many. The situation has been escalating, but we’re in what experts are defining as a sort of plateu.

‘The spreading of the virus seems to be slowing down, the number of deaths, although very high, is remaining more or less within the same range and according to what I’ve been reading, we’re meant to be reaching the peak in the coming days. This means we’re hoping to see a decline in numbers after that. Obviously however the collateral effects of Covid-19 are yet to be seen, and thinking about what is to come after is almost scarier than thinking about the present at the moment.

‘Obviously the measures taken for Covid-19 are affecting the daily lives of many worldwide. When it comes to Italy, I feel like the measures have completely changed the very essence of life in Italy. I’ve been in Italy for the past 4 years, and I’ve seen Italy and Italians change completely over these weeks. What was previously quite a loud nation has become eerily quiet.

‘Many videos started popping up on social media showing cities like Rome, Milan and Florence (where I live) completely deserted. It’s heartbreaking and also surreal as we’re used to constantly being surrounded by crowds of tourists and locals alike at all times of the day, all week. It’s really unbelievable. Socialisation and the need to be together is ingrained in the Italian lifestyle, and all this has been put on halt for the time being.

‘One thing that hasn’t been stopped, however, is a spirit of unity in crisis – people constantly reassuring one another that this will be over soon, companies like Ferrari, Ferragamo and Armani halting their production to produce medical equipment. Small companies are also doing this – for instance there are perfumeries who are now producing hand sanitizers, upholsters who are now sewing face masks. This, together with the bravery of those on the front-line of this battle – all the medical staff, really gives me hope.’

Are we the only ones thinking that this poem is going to be part of our kids’ kids’ curriculum in a couple of years time?